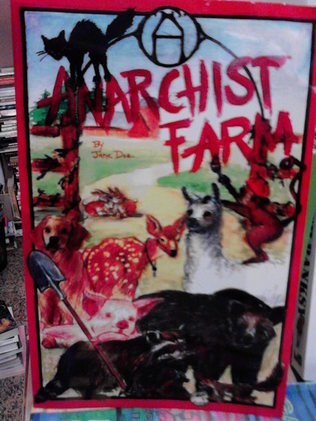 Anarchist Farmm by Jane Doe. A reworking of Orwell with our furry and feathered friends fighting for everyones freedom from the corporation! Fun to read ! -

To be brief, "Anarchist Farm" is Jane Doe's follow up to Orwell's classic "Animal Farm." While purported (by high school literature teachers everywhere) to be about Lenin's Russian Revolution, Orwell's novel can just as easily be interpreted to portray the corruption and stratification of any type of government into an aristocracy.

"Anarchist Farm" continues the story of Snowball, Napoleon's exiled partner, who, under the assumed name of "Pancho" (Trotsky in Mexico?), meets up with different groups of animals who all practice different forms of imaginative, cooperative, non-government.

Throughout the book, which is rather simply (and sometimes poorly) written, the focus shifts from character to character and we see that the story is not as important as the messages (some subtle and some, unfortunately, rather preachy) Jane Doe wants us to get. The bottom line message, i.e., that we don't need anyone to govern us, is often explained in metaphor and through the realizations of the major characters, and it is usually handled well, in an even-handed manner. Other issues which are effectively highlighted include the tricky topic of non-vilonece versus violence, and the notion that "the enemy of my enemy is my friend."

Many other points, though, including homosexual equality, organic farming, punk rock - basically the entire spectrum of politically correct buzzwords and catch phrases - are touched upon in an almost rote, mechanical way (as if Jane Doe had a list of all the "liberal" topics she had to fit in) and so the essential political message of anarcho-socialism is unfortunately watered-down.

The other tragic (no pun intended) flaw is that the deaths of many characters are simply glossed over. While it should be obvious to the reader that this book is, at worst, a thinly-vieled propaganda (albeit welcome propaganda) sheet, the lack of further exploration of death leaves the reader feeling rather empty.

I would recommend this book to anyone of Leftist persuasion who wants a cute, light read to help keep them from burning-out. I would also recommend it as a book to read to children who may need a little more than they can get from good-old Disney comics and films, as long as the parents can help their children with issues concerning the deaths of main characters. This is not a book to give to your conservative friends, though, because it is essentially a sermon to the choir.