ANARCHY IN THE AGE OF DINOSAURS 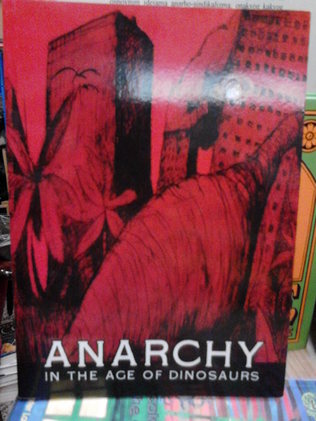 Anarchy in the Age of Dinosaurs, " It's a 154-page, fully illustrated anarchist tactical guide - imagine if some of the practical ideas in the "Anti-Mass" pamphlet were redone by the CrimethInc folks. It covers everything from anarchist shanty-towns, the French Resistance in WWII, to the destruction of dinosaurs - focusing on how decentralization and DIY serve catalysts for revolution." from the Crimethinc camp.

Folk anarchy is the name we have given to the arrow aimed at the heart of every dinosaur. We are replacing the mass movement with a scrappy multitude of mutineers, mad scientists, sprawling shanties, and thieves in the night.
Anarchy is not an end. It is a beginning.

In 2009, the US government stole this book from us. They took every remaining print copy and all the original files and their backups. So we scanned a copy and put it back into print. This third edition is published by Strangers in a Tangled Wilderness, an imprint of Combustion Books.