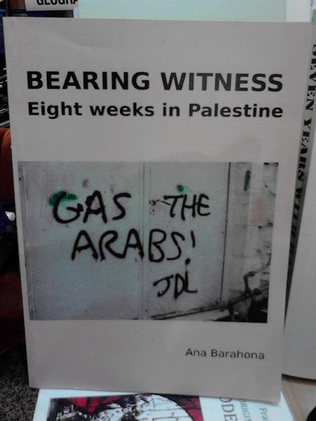 Its well written and well paced, one of those books that is hard to put down. I'd heartily recommend it for anyone wanting to see the human side of the broader situation in Palestine.

For ages I have avoided the whole issue of Israel and Palestine - partly because there is so much to learn even to have a minimally informed view, partly because of the irreconcilable polarity of the debate and the intensity with which it is pursued.

This book is refreshingly different. It is an honest and open-minded account of an eight week stay in Palestine by a volunteer worker. It cuts through the political rhetoric by revealing the everyday lives of ordinary Palestinians for whom daily life is an unrelenting struggle. The people themselves, their reality and their dreams are centre-stage; here you get in touch with their struggle, their suffering and their hopes. It is a challenging book in that it forced me to think about the whole thorny issue. At the same time , it is an inspirational book as what shines through is the human spirit and its unalienable striving for freedom, justice and truth.