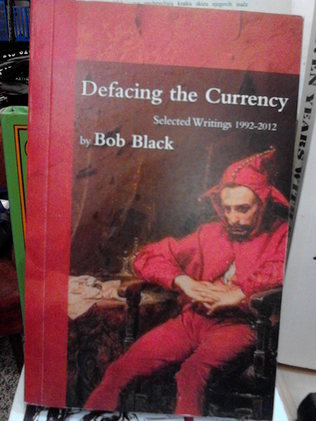 Bob Black’s first book in sixteen years. This is not because Bob has stopped writing, or even that the audience for his work has disappeared. Quite the opposite. It’s been sixteen years since Anarchy After Leftism because it has taken that long for the anarchist space to catch up to him. This 350+ page collection of formerly and freshly published articles also includes a lengthy denouncement of Noam Chomsky as (not) anarchist intellectual, and engagements with democracy, technology,anarchism, and the law. Bob Black is an obsessed, intelligent, and hostile thinker whose writings are, if not the most, then among the most clear contemporary anarchist thinking. His passionate denunciations against the Left are a compelling call to arms. He names names, understands decades of political context, and has the desire to build a rational case for new and experienced readers. That he does it well, especially the naming of names, is why he is despised. Those who despise him confuse the man with the idea, but the idea is unassailable. On the one hand there is anarchism, a leftist, historical-above-all-else, ideology. On the other is anarchy, a life lived autonomously and cooperatively. —from the introduction by Aragorn!