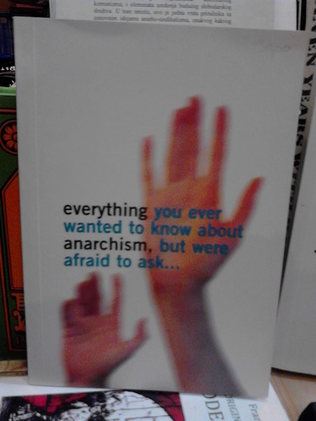 There is probably more rubbish talked about anarchism than any other political idea.  Actually, it has nothing to do with a belief in chaos, death and destruction.  Anarchists do not normally carry bombs, nor do they ascribe any virtue to beating up old ladies.

Our rulers claim to be protecting us from each other.  Actually they are more interested in protecting themselves and `their' property from us.

If you still need to be convinced that an anarchist society could solve the problem of people failing to meet their responsibilities, then imagine yourself being compelled to face a meeting of the whole community you live in and being publicly discussed as a problem.  Ugh!

Above all else an anarchist revolution requires that people know what they are doing and why.  Nobody can be forced into freedom: it must be chosen and taken, or it is not really freedom.  Our task is harder than that of the door-to-door jehovah's witnesses.  It is not enough for us to tell people what to think -- they  must think for themselves,...

.......Some anarchists support the idea of building giant unions controlled from tile bottom up, rather than the usual top down structure.  This syndicalism is a clear strategy for revolution which has been shown effective in the past.  The union ideally includes all the workers in each place and aims to develop self-organisation to the point where the workers can easily take over the factories......

Unlike marxists and other fake socialists, we believe in at least trying to live out our principles in everyday life.  If you believe in equality you should treat people as equals as far as you can.  An anarchist would be less likely to forgive Marx's ill treatment of his servants
and his wife than a marxist would!

Anything that encourages people to take responsibility for themselves and examine their relationship with the rest of the world should be encouraged.