The story of Easton Cowboys and Cowgirls 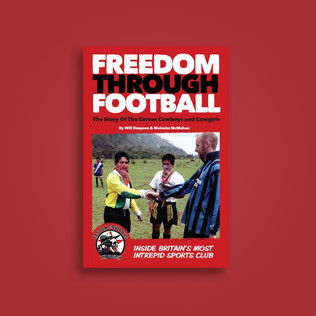 Will Simpson and Malcolm McMahon have painstakingly researched the first 20 years of the history of the Easton Cowboys and Cowgirls. Simpson and McMahon are long-standing members of the organisation that can without any doubt claim to be 'Britain's Most Intrepid Sports Club'.

The anarchist football team formed out of a kick-about between a group of punks and kids from St Pauls and in 2012 celebrated its 20th year. During that time they have played football against the Zapatista Freedom Fighters in Mexico, sent a cricket team to Compton in Los Angeles, organised the Alternative World Cup, played football in Palestine and much more.

A young street artist called Banksy joined the Cowboys on their trip to play against the Zapatistas and the book contains never before published pictures of Banksy at work in Mexico.

Interesting stuff if a little too alcohol saturated!