A critique of optimism in the far left 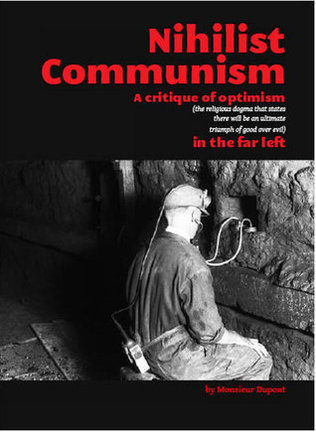 'Nihilist communism' argues against the conception of 'consciousness raising' and recruiting as practised by the far left, whereby it is implicitly assumed that the social revolution may be brought about by enough persons spreading communist ideas effectively enough. Monsieur Dupont also argues regularly against class consciousness and even consciousness as a factor in revolution. To this, they counterpose a model of revolution based on a crisis of capitalism which will necessitate the appropriation of entire key industries by the essential proletariat - a class which they believe should be defined solely by the economic position of its members. They write (in a manner somewhat typical of their style):

'We do not know what anyone means when they describe the proletariat as a social category. If they are implying that the working class as a social body have something between themselves other than their experience of work then we utterly reject this. MD [i.e. Monsieur Dupont] have a penchant for Champagne and Tarkovsky movies whereas our neighbours prefer White Lightening [sic.] and WWF wrestling, our economic position, however, is identical.'

'The Proletariat will not be motivated by political values in its resistance to work but by its selfish interest to assert its species being; its bodily desire to be human floods across the barriers of separation. There is nothing nice or noble or heroic about the working class, it is essential to the productive process which constitutes the structure of our reality and therefore essential to revolution and the abolition of reality based on production.'

In August 2008, Pygmalion Books published as a standalone work (in both digital and paperback form) a partial section of Nihilist Communism entitled "Cruelty or the Inclusion of the Distributive Sphere." Their edition represents the final 40 pages of the book, the remainder of the which can be found on the Internet. In the Summer of 2009, Ardent Press published their own self-edited and designed version of Nihilist Communism.