An anarchist journal of living dangerously 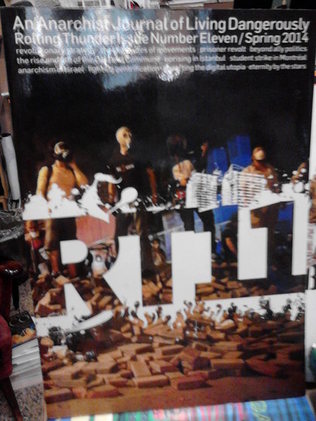 "The history of numbers is not just the history of quantification, but also a history of mysticism. For millennia, people have sought meaning in numbers, or sometimes in a single number.… For us, the really powerful number, the one that occasions a certain gleam in the eye, is the number eleven. Eleven is one beyond. It's the next level, the unexpected escalation, the thing that comes out of nowhere to exceed what everyone believed to be the full maximum of ten. It's the line between workplace grumblings and wildcat strike, the difference between atomized individuals and a cohesive crowd, the threshold between protest and riot. It is the unspoken element that can transform a prosaic conversation into a daring point of departure. It's the frontier between achieving and superseding."

And so begins Issue 11 of Crimethinc's Rolling Thunder. Pick one or two up.