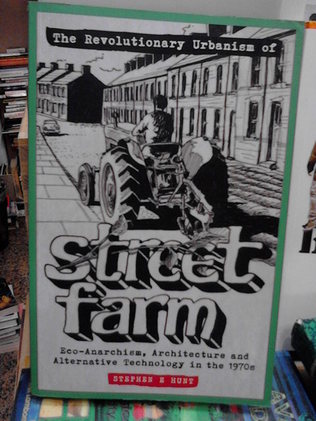 The three friends put together Street Farmer, an underground paper that, alongside mutating tower blocks, cosmic tractors and sprouting one-way signs, propagated ideas for the radical transformation of urban living which they called ‘revolutionary urbanism’.

Taking inspiration from Situationism and social ecology, Street Farm offered a powerful vision of green cities in the control of ordinary people. As well as writing and drawing, the group took part in street activism and squatting, were exponents of autonomous housing and radical technology and became rock ’n’ roll architects, going on the road with multimedia slideshow presentations to a recorded soundtrack of music by the likes of John Lennon and Jefferson Airplane.

In 1972 Caine built and designed ‘Street Farmhouse’ with Haggart and other friends. It hit national and international headlines as the first structure intentionally constructed as an ecological house, appearing on an early BBC documentary introduced by a youthful Melvin Bragg. While their fame was brief, their ongoing influence on prominent green architects including Howard Liddell, Brenda Vale and Robert Vale and Paul Downton has been more enduring.