The sea robberies of the most famous pirate Claes G. Compaen & The very remarkable travels of Jan Erasmus Reyning, Buccaneer 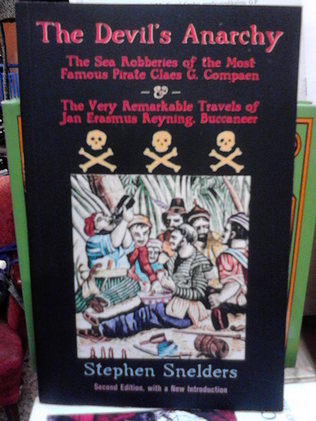 By rebelling against hierarchical society and living under the Jolly Roger, pirates created an upside-down world of anarchist organization and festival, with violence and death ever-present. This creation was not a purely whimsical process. In The Devil’s Anarchy, Stephen Snelders examines rare 17th-century Dutch pirate histories to show the continuity of a shared pirate culture, embodied in its modes of organization, methods of distributing booty and resolving disputes, and tendencies for high living. Focussing on the careers of Claes Compaen, a cunning, charismatic renegado who claimed to have stolen more than 350 vessels, and Jan Erasmus Reyning, who hit the seas at age 12 and became a buccaneer in the pirate jungles of Santo Domingo, Snelders paints a salty picture of the excesses,
contradictions, and liberatory joys of pirate life.